On not getting the reference: When popular culture fragments

People may disagree about the consequences, but not about the basic fact:  In the United States, as elsewhere in the developed world, popular culture ain't what it used to be.  So many entertainment, educational, and other cultural choices are now available that the mass media are reaching far less massive masses, and common ground can be hard to find. While that makes it easier to enjoy your favorite niches, it's become harder for people to connect.

I think of this every time someone exclaims about a character in a new TV show I never heard of.  (I don't have cable.)  The other day, someone showed me a New Yorker cartoon of Captain Ahab and a red whale.  Allusions to well-known classics like Melville's Moby Dick may still be safe for most New Yorker readers, but certainly not everyone.

What's especially interesting for me is, naturally, the connection to reward value.  Hearing an unknown reference can make tracking it down reinforcing--sometimes so much so that I head for my computer and do it right away.  Talk about creating motivation.  It's almost like a mystery to be solved.

What makes it sufficiently reinforcing that this happens?  Lots of factors, of course.  If the reference is made by someone I chat with regularly.  If it's positive and comes up more than once or twice.  If it's relevant to what I do, or something else I find rewarding.  Even if I hear total strangers discussing it, if it sounds sufficiently humorous or important or popular.  You can generate your own list, an interesting exercise in understanding your own motivations.  If I'm crunched for time--recall that we always have choices between different consequences--then I might forget it, or make a note of it for the weekend.

Sometimes the effects are considerably delayed.  I'm not sure what finally did it, but after resisting for years, I finally read the whole Harry Potter series and saw the movies. Now I know what everyone was talking about!

Posted by Susan M. Schneider at 2:24 PM No comments:

Dance of the Balloons

Balloons created and clutched by little dance flies, that is . . . as described in my book.  Over time, different species in this family of insects developed variations on the basic dance that forms their courtship ritual--"as close to behavior fossils as we're going to get."

I've never seen this spectacle, but now my brother has!  He was even able to get this photo.  You can't really see it, but attached to the balloon is an even tinier edible insect for the female to nosh on during mating.
Posted by Susan M. Schneider at 8:34 PM No comments:

Holes in the jeans 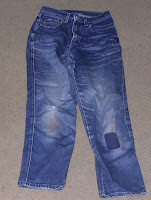 Find holes in most items of clothing and throw them out or fix them up.  Holes in jeans, it's a style!

Faddish fashion rewards can and do regularly overrule common sense.  When I taught college in Minnesota, I well remember my surprise at seeing students wearing jeans with holes in the frigid midwinter.  Brrr.  The celebrity who got this one started has a lot to answer for!  The style has been passé for years, which is some reassurance.

But then, no one said that rewards have to make sense.  And no one said marketers couldn't try to make weird things desirable.  They can and they do.

And we do too.  On a more everyday basis, consider the effort we go to to get others interested in what we like--that is, to change its consequence value for them.  (If they come to like it, that's rewarding for us.)  It might be something unusual, or it might just be a new movie.  Know people well and you know exactly what approach has the best chance of working.  After all, you've seen what works for them in the past.

You might even be able to convince them to put holes in their jeans.

Posted by Susan M. Schneider at 7:57 PM No comments:

Email ThisBlogThis!Share to TwitterShare to FacebookShare to Pinterest
Labels: everyday, people
Newer Posts Older Posts Home
Subscribe to: Posts (Atom)
Consequences are everywhere!--and this blog will follow them into every nook and cranny of life.