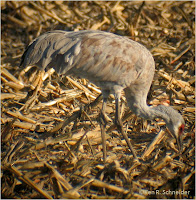 Bird migration is on my mind, and not just because of the geese I’ve been hearing overhead.  I’ve been fine-tuning a book-related talk for the Central Valley Birding Symposium here in California later this month:  "No Birdbrains Here: The Latest on Bird Learning, Instinct, and Intelligence."  Should be fun.

This birding festival is scheduled at a time when many thousands of birds descend upon the Central Valley for the winter, particularly ducks and geese.  An additional winter highlight is the spectacular, nearly five-foot-tall "greater" subspecies of the sandhill crane (along with the smaller "lesser" subspecies).  The crane in the photo is an adult, as you can tell by its red crown.

While learning appears to play at least a small role in the migration of many bird species, it clearly plays a major role for cranes and most waterfowl.  The cranes, for example, migrate in their family groups.  Without adults to guide them south, young birds born that year are clueless.

Attempts to re-establish the endangered whooping crane in some of its former eastern US range have relied on ultralight aircraft leading the way (see this link).  Encouragingly, the first group of young birds managed to return to their breeding grounds on their own in the spring.  Researchers have found, however, that the cranes continue learning, fine-tuning their migration routes over many years (and this long and detailed blog post by GrrlScientist provides a nice summary).

As always, the interactions between "instincts" and learning from consequences are fascinating--and there’s still much we don’t know when it comes to migration.  What exactly is the role of the earth's magnetic field, for example?  Some migrant birds are clearly influenced by it, but decades of research have shown that the story is complex and still mysterious.  One of my colleagues, Michael Davison (University of Auckland, New Zealand), coauthored a study on this topic in the prestigious journal Nature.  Using a choice setup--with rewarding consequences, of course--the researchers demonstrated that homing pigeons could detect changes in the intensity and inclination of a magnetic field.  Pretty impressive.

For really impressive, though, visit your local park or wildlife refuge and marvel at the feats of long-distance migrants, frequently returning over thousands of  miles to the same breeding and wintering areas year after year.  If you can't get away, I recommend Scott Weidensaul's Living on the Wind, a great read about bird migration in the Americas.