I haven't posted on positive animal training in a while, so here's a link to a youtube video from a few years ago that stuck in my memory:  "Trickmousing."  It's a bit less than 3 minutes long, and "cute" is a word that inevitably will come to mind.

Most people have heard of dog agility by now; there are local and national competitions in which the dogs eagerly leap hurdles, dash through tunnels, and handle a series of other obstacles as directed by their humans, who run alongside.  On the Links page of my website is a video of a lamb surmounting the same challenges.  Why not?  Even so, how cool that mice can do this sort of thing too--and more.  On the video, the mice leap little hurdles, retrieve marbles, dunk a basketball, and even skateboard.  (Hey, remember that dogs can learn to drive a car, no foolin'.)

The accomplishments of these mice show what positive reinforcement and clicker training can do.  As many of my readers know, the clicker sound is immediate and obvious (you can hear it in the video), and serves as a reinforcer in itself as well as a "bridge" to a more powerful reward like the food that the mice get. Specific information about these mice and their training is available through the links at the youtube site.  (For general information, see the links on my website or the references in my book.)  I appreciated that the trainer recognized how social these animals are and took pains to avoid isolating them.  That's why more than one mouse is frequently in view, although only one is showing off its stuff at any given time.

A recent post on Current Developments in Behavioral Science summarized the latest research showing that babies have to learn to perceive and avoid the apparent dropoffs called "visual cliffs."  Even though they can see, their lack of experience with depth perception and the dangers of heights puts them at risk.

While that's taken for granted these days, I was reminded of two related findings even more dramatic.  The first can be illustrated by an example from anthropologist Colin Turnbull's classic, ﻿The Forest People, in which he describes his time living with the Pygmies of what's now the Democratic Republic of the Congo.  On his first trip away from his dense jungle home into large open spaces, Turnbull’s friend Kenge thought distant objects like animals really were as small and bug-like as they appeared.  His background had not provided suitable experience in perspective, showing how important learning from consequences is to this essential skill.  Presumably, as children we have to learn this too.  Anyone remember their experience? 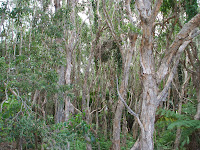 Then there's the line of research on blind people whose sight has been enabled.  Way back in the 17th century, John Locke speculated that such people who were blind from birth would be unable to visually discriminate shapes without some experience.  He appears to have been right (and that's also the case for many blind people who'd previously had sight, but not for many years).

In one recent case study, a young woman born blind had her sight partially restored in one eye at the age of 12.  According to her parents, only after months of learning was she able to acquire skills such as the ability to recognize people visually (Ostrovsky, Andalman, and Sinha, Psychological Science, 2006).  These researchers summarized current views about these skills as "learned over time through experience" (p. 1013).  For a less positive example tracking the ups and downs of the process in detail, neurologist and author Oliver Sacks described the case of "Virgil" in An Anthropologist on Mars.  As Sacks pointed out, unfortunately, a number of the re-sighted never attain anything close to normal vision, and some understandably become depressed.

Talk about depressing, some experts used to think that most re-sighted blind people would never be able to use their vision properly because of irreversible changes in their brains.  Let's hang on to some hope, though:  Clearly some can.  And, while the extensive brain plasticity that we now celebrate is far from unlimited, perhaps new help for rehabilitation may come from the introduction of methods from the science of consequences--much as has been the case for stroke victims (described in Chapter 4 of my book).

Animals do!  People used to think that our own species might be unique in following a musical beat.  Wrong.

In my book, I cited a 20th century anecdote from author and animal lover Gerald Durrell:  "A hand-raised pigeon loved music and would snuggle close to the speaker of an old-fashioned record player. What’s more, the bird performed distinctive dances to marches and waltzes."  That would seem to indicate some sense of rhythm, along with possible intrinsic reinforcement value for moving in time to a beat.  I'm sure there must be many such anecdotes.  (Do share them if you know of any!)  In the end note accompanying Durrell's story, I mentioned a sulphur-crested cockatoo that appeared to be following the rhythm of rock music, made famous on a youtube video that went viral.  Researchers in the journal Current Biology concluded that indeed the bird was.

The next step:  Check it out with a mammalian species--and one that's not especially good at vocal flexibility in response to consequences.  In a recent issue of the Journal of Comparative Psychology, Peter Cook and colleagues showed that Ronan the female sea lion could learn to bob her head to different rhythms just fine, even from complex music.  Thirty weekend training sessions was all it took.  Standard positive reinforcement methods were used, and if you want to enjoy watching Ronan in action, check out "Beat keeping in a CA Sea Lion" on youtube.
From lab studies, we've known for many years that animals can learn to time events quite accurately.  How cool that scientists are now building on this research to look at something that appears to come naturally to many people.  I would say everyone, but I've danced with some who could have used a few lessons!

Most people, like Durrell's pigeon, find that moving in rhythm with the beat of music is rewarding.  Where does that come from?  Would Ronan eventually enjoy "dancing" and do it spontaneously, like Durrell's bird?  Stay tuned for further research.
Posted by Susan M. Schneider at 4:52 PM No comments:

Just a quick note:  I post about four times a month--not four times a week--so having the ability to follow this blog automatically is especially handy.  According to some comments I've received, the existing way to choose "follow" doesn't always work reliably.  I've now added a widget in the righthand column that should let you do this more easily (via email).  Do please let me know of any problems with it, and thanks for your interest in this blog!
Posted by Susan M. Schneider at 11:32 AM No comments:

Email ThisBlogThis!Share to TwitterShare to FacebookShare to Pinterest
Labels: book/website/blog news
Newer Posts Older Posts Home
Subscribe to: Posts (Atom)
Consequences are everywhere!--and this blog will follow them into every nook and cranny of life.